I know I've told you all on many occasions how much I love my photographer...

It's not just because of how she makes her price for me something I can afford, or how It's because I've known her for years and seen things i probably shouldn't (wink, wink)...
I love her because of how incredibly talented I think she is and how she seems to capture the very realness of me and my amazing family and how she knows just the right poses and places for us that arn't what you see in "traditional" pictures..
I want her to succeed in this chosen carrier more than I think she even realizes.


ANYWAY as a result of my #1 fan status with her she gave me a gift this year and I must tell you, next to my children I think it's the most amazing gift I have ever been given... It's something I've always wanted to have but would never(at least for a very long time) be able to give myself and it's perfect and it will last forever...

She gave me a canvas picture of my favorite family pose from this last session... Those of you who haven't seen it IRL it's like a shoe box top and the picture continues over the sides of it... It truly is the coolest thing and I'm so proud to have it.... 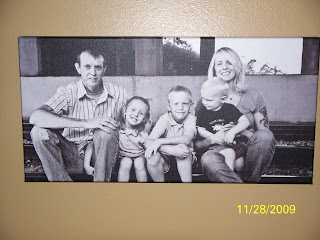 Something's gotta change!!! I don't know what or how but it MUST!!!!!!
WWWAAAYYYYY back in Sept. when school started my mornings went a little like this......

FOR THE PAST MOTHER LOVIN MONTH if not longer cuz really it all runs together these days...

Oh well, maybe now that i vented all will get back into place like it should.....
Posted by Janet's page at 9:55 AM 1 comment:

Learned or rather copied

I have decided, well I decided awhile back but am now going to blog about it... My home and everyone in it tends to say the word "no" way more than they should!!

Let me digress a bit here...
When Isaac was about the age Ari is now I remember going into work (back when i worked during the day 2 days a week ahhhhhh the freedom) and talking to one of the doctors I work for/with about how he had developed this new thing that i really didn't like....

Whenever told he couldn't do or have something he would chew me out in his own language and stop his foot..and I told her "I don't know where he's getting this from" and she says to me "Well Janet, you know he's not in daycare or anything like that and he's to young to be learning this behavior on his own, typically they mimic/copy what they see at home"
I remember looking at her and saying "I don't think so, Chris nor I do this" and I wanna say within 15min. of this conversation she tells me to do something I don't want to do or someone else gets to do something I wanted to do and you know what.... yup you guessed correctly, I made a grumpy noise with intake of breath and stomped my foot...
IMMEDIATELY looked right at the doctor and she starts cracking up!!!!!! and no sooner is she laughing at me that I without any thought of it DO IT AGAIN as I turn to walk away......... She Laughs even harder at that.... DANIT she was right and I hate that!!!

Now back to the present.... With that knowledge in hand or head rather, I start to really pay attention to what I'm saying because you see BOTH of the bigger kids are ALWAYS saying No at the beginning of any sentence even if they agree with me they start it with No.....
Sure enough I'm doing it ALL THE TIME and I'm not even sure why, it's not needed to start any of the sentences that I use it in......Hmmmmmmm

Well after many weeks of observation I have come to the realization that I'm not the only "adult" in the house that is doing this and you know what I probably got it from him... yup that's right...

Now that I'm aware of this you would think it would be easy to fix..WRONG trying to get Mr. No pants to be aware is a totally different thing.....

Now I'm on a mission, kinda like his smoking......Maybe if I point this horrible offense out EVERY time he does it then it will stop????????or maybe he will read this and be more aware??????


On another note, I have made (really not all that new either) the discovery that I'm really unhappy with myself and the lack of filter that I have... I DESPERATELY want to be one of those mom's who no matter what's going on or how frazzled she is you wouldn't know it... I DESPERATELY want to be one of those moms who doesn't let her face and tone show how overwhelmed/stressed/frustrated she is when her kids are talking/bugging/driving her nuts... Sure we all have our moments but I'm unable to have "moments"... When it comes down to it I can't stand myself most days and really really really want to be able to at least internalize things in front of my kids more! much more!! I wanna be the mom that occasionally(like 1x every other day) has a "moment" not the every single many times in each day mom that I have become.....***sigh***
We'll see what happens!!

Oh ya I'm lovin this thing for Christmas that a fellow blogger is doing with her kids and I think(know) we are going to do it too!! it should really help out with waste and $$!!!
It's the idea of getting your kids 4 things
-want
-need
-wear
-read
Chris want's to add a "listen" to the list the music junkie that he is

Doesn't that sound so cool?!?!?! Thanks "Finding Chaos"

Now if only I knew of someone who was crafty who could make me tags with each child's name and each one say for example: Isaac then under it say "want" hmmmmmmmmmmmm, hint hint, wink wink...........
Posted by Janet's page at 12:06 PM 2 comments: 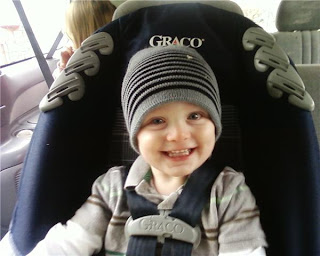 I think my phone takes better pictures than my camera
Posted by Janet's page at 12:57 PM 2 comments:

So this is the best i can get at this moment.
In total only 3 little fishys made it but not to bad if you ask me coming from juvenile parents :-)
In the one picture 2 baby's are next to mom and in the other there is one baby under mom's yellow gill right in front of her ventral fin :-) 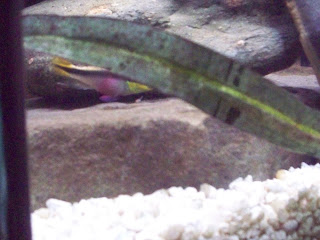 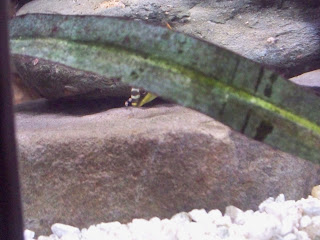 I gotta tell ya, I'm enjoying this whole fish reproduction thing way more than I thought I would...
From courtship to egg laying to wigglers to now the first few attempts at free swimming with mom. At any given time I see none to 6. Today so far only 3 to 4 have been seen. Mom will swim up to them(you can't see them) and they will come up out of the rocks to her, little clear but spotty baby's with eyes and a mouth.. I wish my camera would focus on them for me to share a picture....


I wasn't able to get any pictures of the rollerskating party but a friend did and so far these are the 2 best of the small group she has posted :)


Me, my big sis(dusty) and Chris is in the background :-) 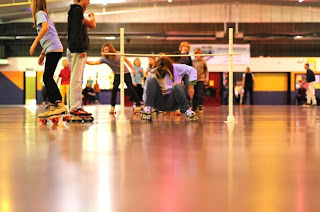 What do ya know

We have baby's, itty bitty little wigglers!! and there is no way to get a picture of that. Hopefully some will make it(numbers have already diminished a great deal from yesterday when they were moved) and I can get a picture once they are free swimming... So young and such good parents, sucking up and spitting out to keep them safe! 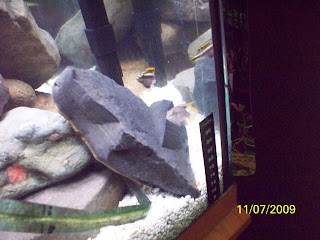 This is the best picture i can get. My camera it seems is quickly becoming out of date.
These pretty little guys are Kribensis Cichlid's. The male "Bernie" is in the front and the female "Wanda" is in the back with the very pretty purple belly... We have had this beautiful pair for just over a week and today I noticed that we now have eggs :-) Yeah!! they are on the other side of that black/grey rock.. They lay them on the underside if the rock and you can barely see them from the other side of the tank on the top looking down. Now we wait and anywhere from 3-8 days we should have baby's!!!!! So excited, we were told they probably wouldn't breed until they reached a more adult size, they are considered juvenile..
Chris just handed me a video of them, let me see if i can get it on here....
Posted by Janet's page at 8:23 PM No comments: 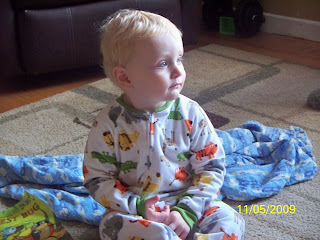 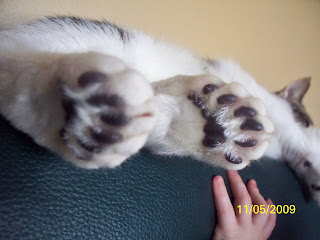 Look at those massive deformed feet, I love them 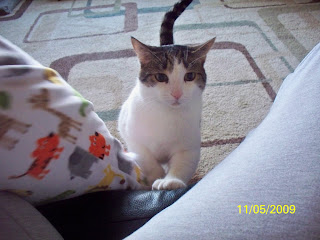 My best boy, aside from my boy kids that is :-) 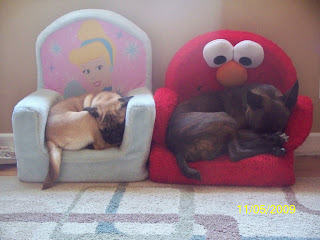 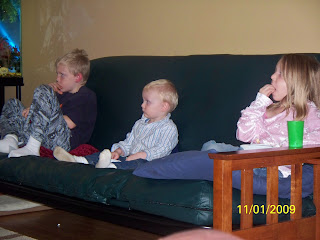 This is what it looked like at my house last night while watching Ice Age 2!! I love my kids!!!!
Posted by Janet's page at 8:14 PM No comments: