I think there is a secret universal thing that happens to us when we become mothers....We easily become cheerleaders of kids, not just our kids mind you but all kids who are trying something new or just plain trying REALLY hard....
An example, while at the school carnival I passed a young man from Isaac's class and said "hi Chauncey"(learned his name the first 30sec. of my first time serving lunch, why bc he's so hyper his tush NEVER stayed in his seat for more than 2sec.)
ANYWAY he says to me this big long winded something about how he did this game and it went in the last bucket on his first try and he did it 2times in a row and no one else had etc. The jist of it was that he's a rock star so I say something like "THAT'S AWESOME, WAY to go buddy"!! 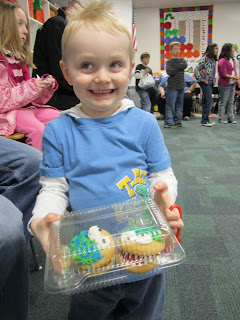 Little man was winning EVERY game he played, not just "good try, here's a prize" but actually winning. He won the cake walk the first time we did it :)
We went back one more time and wouldn't you know it he won again AND SO DID I, woo hoo!! 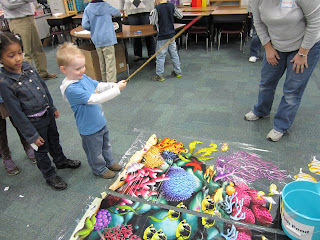 Here he is fishing and not doing to shabby
Posted by Janet's page at 1:00 PM

I've never understood people who aren't genuinly happy for a child who is succeeding. It's not a competition here people. Just be happy for someone else once in a while.
I'm so glad you were.

And how cool is HE winning all of the games. NICE JOB !

Glad you had fun.