As many of you know my youngest child is..............different.
To say he marches to his own beat is an understatement! He is nothing like what the 2 older kids prepared us for!!!
This 3rd child is on one hand the most layed back easy going in regards to his schedule and doing things and how quickly he will bounce back from changes BUT he is also the most stubborn, opinionated, devious, super duper smart, problem solver, get into trouble and fast, type.. I thought the 2nd was keeping me on my toes but she was a walk in the park compared to #3!!!!!

With that said let me continue, as fall approached us I realized that he needed something more than just his "blanket" to cover and keep him warm....
After much searching I found this cute, soft,
throw blanket with Dino's all over it 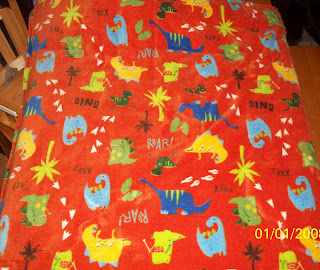 The child rejected this blanket, wanted nothing to do with it, would sleep cold before he was going to let that blanket in his bed "crib".(remember he doesn't do well with sleep/bed type changes, was not ready for the big boy bed after putting it together and we had to go back to the crib) After at least 2weeks of putting it in, having it throw out, him using it to watch tv or read books but NOT allowing it in bed he finally gave in and started sleeping with it.
As a matter of fact he would yell for us to put it in bed and ON HIM if we forgot or it fell off before he was asleep.....
insistent little bugger!!

This brings us to winter, NOW it's much colder than a silly fleece dino throw can manage sooooo we ask Papa "aka fil" to get him a nice blanket for Christmas, not to big or thick because I may end up sewing the thing....

Papa gets a terrific quilt for the child for Christmas(I actually have the exact same one on my bed just a different shade of green), it's a little on the big side but not a big deal..... WELL he wants nothing to do with it, no way, no how!! He doesn't care what you say or what you do it's not happening(aside from duct taping the thing to him:)).....
THIS TODDLER IS NOT GOING TO BUDGE, NOT EVEN WITH BRIBERY!!!!!!
Norah thinks she would like that nice quilt on her bed and hey why not, hate to see a thing like that go to waste, go for it girl, use it and we'll put the blanket nanna made ya on top :-)

Last night after work I went to get a gift card for my 18yr old cousin to do a little shopping(were doing Christmas this Sunday with them) and what do my eyes show me, why a super awesome warm down alternative fleece one side microfiber on the other blue throw blanket.. I check the price of it and wouldn't you know it's only a buck more than the Kohls cash that's burning a whole in my wallet, obviously a sign and ment to be.. 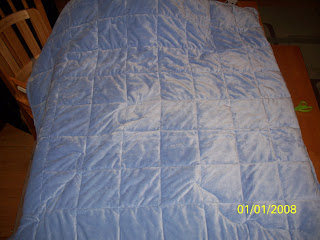 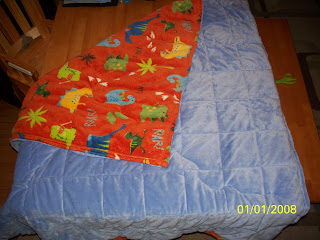 I can say that he makes me laugh the most each and every day... Wouldn't surprise me if he ended up working in entertainment someday :)