All in a day's work

Well there you go, finished project(minus the little cap thingies that I must find in the garage)


Lets just see if someone can steal an item from my garage in broad daylight again, or dogs getting out and getting hit by a car, or for that matter an Ari jumping ship and taking off....... Ya none of that's happening again!!!! 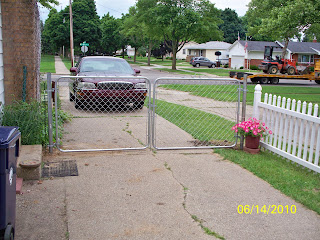 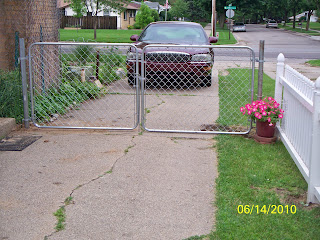 We've been up to a lot lately but I've forgotten my camera or blogger's been such a turd I haven't been able to get on... Yesterday we did (as a family) go for a nice long walk to a park by us that has a really nice nature path and I only screamed once:)
I didn't scream when I saw the (I'm sure) dead snake, nope I didn't! BUT when I rounded the corner and saw my little man bent down to what at first appearance was another one I did in fact scream (but just a little) and then found out it was just a skin...... AND THEN I didn't scream when I saw a little itty bitty creepy snake curled up on a log and did in fact tell Chrs to HURRY UP OR IT'S GOING TO BE GONE so that Ari could see but Norah moved closer and it went on it's marry way:)
PHEW

We did however catch some fish(on Norah's suggestion) 4 as a matter of fact. Isaac was the spotter and Chrs was the catcher and now they are in the "hospital tank" in the basement, we even found out what they are (bless the internet) but I can't remember now.
That's all for now folks :-)
Posted by Janet's page at 6:58 PM