So we had my sister's 2 youngest over Saturday afternoon and evening and it was Ari's first time (that he'll remember) really playing with cousin Jona.... Man does she love him!!! I was so pleasantly surprised by how much she played with him...

See it was his bed time and I forgot to put his blanket in the dryer and ya know he needs it to go to sleep. Anyway Miss Jona took it upon herself to be the baby entertainer until it was dry... They played just the 2 of them for about 40min(blanket was dry but they were having such fun):) Crawling from one side of the room to the next then playing peek a boo with the double cat tower thingie in the sun room....It was awesome!!!!!!

Oh and get this, we have decided that we need her to come over every night at about 7:40 for about 30min. Once everyone was in bed but her and her brother she just organized the toys and picked EVERYTHING up. Shoes too.... We told her dad we'd pay her to do it:) She's 5!!!! 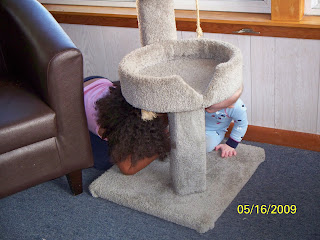 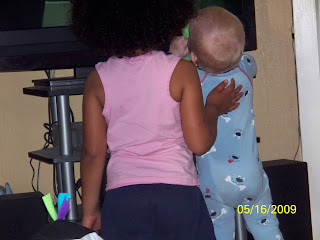 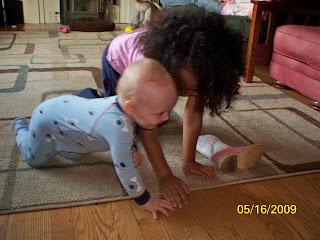 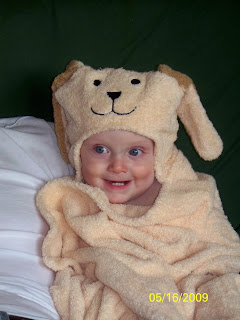 First time with the puppy towel:) Chris showed him what he looked like and he actually barked:)
Posted by Janet's page at 2:17 PM

and then send her to my house.